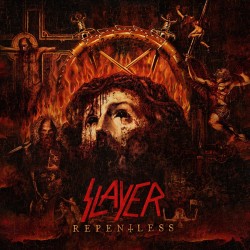 If you love to mosh, blast loud music, break shit, get pumped up by fast and heavy sound, dig dark visuals and lyrics, all while being auditorily assaulted, you must be a Slayer fan.

Repentless is Slayers 12th studio album, first after the passing of Jeff Hanneman. The biggest of the big 4 have created another astounding metal album. Production, mixing, track arrangement, sound quality, and trashing speed all rank up there as some of their best work. The title track, “Repentless”, is a thrash metal tribute for the late Jeff Hanneman. Kerry King wrote “Repentless” as a reflection of how Hanneman saw the world, “I hate the life, hate the fame, hate the fuckin’ scene, pissing match of egos, fuck their vanity”. In a recent Rolling Stone interview, King stated that Jeff lived his life Repentless, and that was the inspiration for this track. Every track on this album has that signature Slayer sound. My personal favorite track is “Take Control”. The day I got this album I listened to it four times, each time “Take Control” started I felt the urge to jump through the wall like a thrash metal Kool-Aid man and mosh in the streets. I also love the remastered B side from World Painted Blood, “Atrocity Vendor”.

Repentless has so much energy, I can’t stop listening to this album!