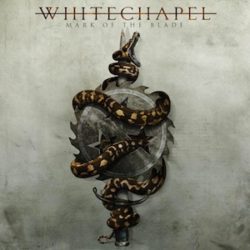 Whitechapel – Mark Of The Blade

Whitechapel are back with their 6th dose of brutal heavy ass kicking with Mark of the Blade. And yes as you’ve heard by now there is *gasp* clean singing. I’ll touch on that here in a bit. But first let’s take a second and look back at Whitechapel and their ever evolving change in style and music. Over the past 3 albums we have seen a gradual movement out of the “deathcore” genre and start incorporating more elements of thrash and metal. Mark of the Blade pushes farther into these genres more than any previous release has, and the results are a welcomed change for many.

There has always been the stigma that “deathcore/metalcore/any kind of core” bands can’t evolve, that their style of music is pretty limited to what we’ve already heard. Bands have more and more as of late been trying to buck this trend and blaze new paths. This always ruffles feathers within the fan bases with some furious that a band “sold-out” by ditching their initial sound, while on the flip side fans rip bands that refuse to change their style. This is pretty much the topic touched on with the track Elitist Ones and recently front man Phil Bozeman stated “People are just so judgmental, it’s one of the most judgmental genres that you can be in. Because if you’re not this type of metal then you’re not true metal, there are just so many sub-genres of metal that it’s almost like a fashion contest at this point. A fashion show, you know?”

Ok, so now let’s take a quick dive through this album shall we? Lead singles The Void and Mark of the Blade were made available weeks prior to release and carry that signature Whitechapel feel we got the past couple albums. I’ve included them below this review for those who have yet to hear them. Bring Me Home, the first of 2 tracks that feature clean singing, shows of Bozeman’s range as a vocalist. I was shocked to hear just how well this sounded. He has a very Corey Taylor-ish feel to his voice, and that’s not a bad person to be compared to. Paired with the slowed groove and solid guitar work this track will calm most of the people who hit the panic button when hearing about the singing.

A Killing Industry was another song that stood out with its crushing assault from all 6 members. This was a track that will easily transition into their live set and get that pit going. We’re also treated to a instrumental track in Brotherhood. Even without Phil’s growls and screams it manages to still deliver a heavy track filled with solos and a pounding drum assault. Second singing track Decennium closes out the album while not as powerful of a track as the first one it still shows off the potential range that this band can have going forward.

This was a pretty bold step to change up vocal styles with the two tracks and it paid off. I actually wish there was more of it present on the album. Mark of the Blade is a big step from the last release, Our Endless War, and opens many doors for the band. Chapter 6 in the book of Whitechapel has proven to be a bright spot in the bands history. I highly recommend that anyone and everyone give this album a listen! After picking the album up get out and see them out on Vans Warped Tour all summer and more festivals this fall!

Next article - Motionless In White Sign To Roadrunner Records »