Home » Featured Artist » Feed Her to the Sharks 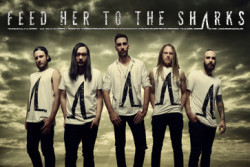 Feed Her to the Sharks

03 February, 2016 Mark Featured Artist 2031
Feed Her to the Sharks
Let Us Know Your Rating

Feed Her to the Sharks bring a fresh take to today’s metalcore scene by blending in aspects of melody and even a bit of electronic elements. My first experience of the band came on this most recent (and final) run of the Rockstar Mayhem tour. Not going to lie, initially it was the name that drew my interest and in turn had me check them out. I mean, come on, how is this not one of the coolest band names in metal?

I was instantly pulled in by their mix of melody along with aggression, with tracks like The World is Yours and Chasing Glory. Those two solid tracks served as my gateway into their 2 full length albums. Their first album, Savage Seas (2013), had a more raw feel to it while their latest release, Fortitude (2015), has a more polished and cohesive sound. For being only their second release, Fortitude,  feels huge. They have a sound and style that rivals more established bands such as Parkway Drive. I think with another release with the direction they took with Fortitude and a few more tours and they will jump to the forefront of the metalcore genre.

The future is bright for these boys from Australia and I’m excited to see what they have in store for us all.

But don’t just take my word for it, check them out for yourself:

Feed Her to the Sharks is:

Next article - After The Burial – Dig Deep »