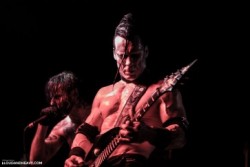 It was a night full of love songs, ones that we could all dance to. Punk rock legend Doyle Wolfgang Von Frankenstein(ex-Misfits) brought his solo band to town in support of their album, Abominator, and to give us all a nice hefty dosage of Misfit tunes to accompany it. I was prepared for a great show based off the word of mouth reviews I have heard from people, but damn was this a heavy, fast, and loud performance. Did I mention that it was loud?

I must say for this being Doyle’s band, frontman Alex Story is phenomenal. His ability to control a crowd and get everyone involved brought this show to a whole new level. Even performing the tracks from the Misfits catalog, previously performed by he who shall not be named, came across as fresh and full of life.

The show started off with them going right for our throats with their title track off the debut album, Abominator, and never letting go. As mentioned earlier, they bounced back and forth between album tracks and some of the Misfits greatest hits. Some personal highlights included Misfit hits Skulls and Last Caress as well as Dreaming Dead Girls and Mark of the Beast off their Abominator album. They even managed to take Strutter, made famous by KISS, and make it their own heavy thrashy anthem.

This band completely blew me away and left me with a desire to see them live again and again. They were a perfect pairing with co-headliner John 5 on this Mad Monsters Tour, and really balanced out the bill. If you are a fan of a rocking, heavy, punky live show you need to get yourself to a Doyle show if they come to your town.

View our full Doyle Gallery over on our Facebook page!