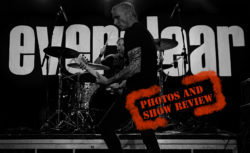 I have very little context when it comes to Everclear live, or really, Everclear at all. In the 90’s when Everclear was at the height of their popularity with hits like “Santa Monica” I was dug deep into the budding metal scene. But I still paid attention to them, because back then it was difficult not to when your only true inlet for music was MTV or listening to the radio.

I won’t lie though, being 36 now, Everclear coming to Sacramento was something I actively wanted to see because for one night I wanted to remember what it felt like to be a teenager again. So I did, and in order to understand the evening I need to first share that Local H (the first opener) absolutely killed it. I had zero information on them with the exception of one song I remembered from the 90’s, but they were energized and amazingly fun to watch and photograph! So much so, that I would like to go catch them when they come through again.

Then there was Marcy Playground, who again, I and everyone else I noticed in the crowd only remembered one song (Sex & Candy) and while I hate to sound rude here, they definitely did not belong on this bill, or they should have at least opened the whole show, between just sounding and being boring with a lackluster performance, and technical difficulties that made them cut their set short, it was just not something I was into.

This was an interesting evening for several reasons, some I noted above but the other being that in between each band (with the exception of his own) frontman of Everclear Art Alexakis would come out and chat with the crowd and play some 90’s alt rock hits for everyone. This felt a bit strange because it had a weird salesman kind of vibe to it, but I can’t figure out what he was selling, or if he just enjoyed interacting with the crowd more than his bands hour long set they had at the end of the night. Either way, it was also refreshing to see that, which also really humanizes artists for people when they are nice enough to interact like that, so kudos on you Art.

Then, finally, the main act that everyone was waiting on, and I was patiently curious came on. They all took the respective positions on stage and didn’t say a word. Then suddenly ripped right into “So Much For The Afterglow,” and I was surprised, shocked, slightly in awe of how much energy and passion they had, still hanging on to this SoCal 90’s punk rock edge. Off I went shooting and rocking out during. To say the least, they were not just entertaining, and they definitely weren’t boring, they for sure had the energy of a rock band that’s much younger, or maybe just one that is still enjoying what they do on a daily basis? Either way, they really did come out embodying everything we love about rock & roll, not matter what you think of who Everclear was in the 90’s, or the scene they came up in, they are just a raw, talented, fun rock band that is definitely worth the time going out to. Cheers!