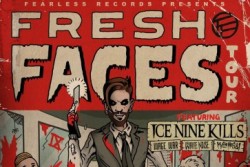 Earlier this year I got my first sample of Ice Nine Kills when they came to town with another Fearless records artist, Motionless in White. Even though they were in a brief opening support role, I knew that by what I saw then that this was a band I needed to get more of. So, when the announcement from Fearless Records came out about their Fresh Faces Tour with Ice Nine Kills headlining I knew that there would be no way I could miss this.

The idea behind the Fresh Faces Tour is to showcase their newest bands, many of which are making their first rounds of touring. But, after watching each of them take the stage one by one you would never guess that these were new bands, each had a presence to their stage show and a sound that got the crowds going.

First up was The White Noise out of Los Angeles California. When doing my pre-show research, this was the one band I couldn’t find really anything on, so I really didn’t know what to expect. But within moments I knew I was in the right place, the vocals were harsh with a sense of aggression but were balanced with good melody. They definitely fit right in with the rest of this lineup and were a great way to kick off the featured acts. The songs that really struck me were Bloom and Red Eye Lids, both definitely left me interested in seeing what this band does in the future. In talking with the band members they said the debut record will begin sometime early 2016, so keep an eye for these guys!

Up next was probably my personal favorite new band of the night, My Enemies & I, from Richmond, VA. I had already checked out their EP, Sick World, prior to the show so I knew a little of what to expect sound wise. This album hooked me in immediately and is definitely worth your time. I also had a chance to interview their singer, Jeff, and guitarist, Zach, prior to the show and discuss their influences and thoughts on their tour. The first thing that I noticed about them was their obvious presence. The band all wears matching solid black contacts and on stage uniforms while the singer has one black & one white contact and black body paint. Their sound is a perfect mesh of intense vocals, crushing grooves and melodic rhythm. I was pleased to hear personal favorites Reborn and Toxic make their setlist, and they absolutely killed it! I was already a fan just from hearing their EP and after seeing their live performance that has been further cemented in place. This is a band that is certain to rise fast and stand on their own.

By this point the crowd has been worked up and you can feel the growing energy in the room as the last supporting artist, Wage War, was taking the stage. This Florida based quintuplet came out swinging with a set that was relentless with crushing breakdowns and harsh vocals. I had only been exposed to a very brief sample of Wage War prior to this night and nothing prepared me for how heavy this band actually was live. Their tracks Youngblood and Twenty One had the mosh pits open and head banging. Their debut album, Blueprints, will be released VIA Fearless Records on November 27th and I would certainly recommend it to anyone based on what I heard live.

Now that these bands have helped crank the energy levels to 11 it is time to unleash what we’ve all be waiting for, Ice Nine Kills! Like I previously mentioned I had only been witness to a very brief sample of what an Ice Nine Kills show really is. The fog was pumping off the stage, the giant IX signs illuminated through it, the buzz amongst the crowd was at its peak. Through the fog , front man, Spencer Charnas appeared and kicked off their set with Me, Myself & Hyde followed immediately by another new track, Bloodbath & Beyond. Both were tracks i was very eager to hear live after really enjoying the album versions, and I was not disappointed! Spencer’s onstage presence and energy is second to none, he’s not afraid to get right into the crowd or even in this case do a little crowd walking. I’m a firm believer that a band can really live or die based on their front man. Spencer is easily one of the best in the business  and it really helps take this band to another level. The band carried on with the high energy and continued to crank our hit after heavy hit featuring fan favorites such as their cover of Maroon 5’s Animals, their latest single / video Communion of the Curse and also crowd pleaser The Power in Belief.

Having already known a little from seeing this band previously i had anticipated a great show, but nothing could have prepared me for a full length headlining performance. This band demonstrated that they are ready for that headlining center stage role and hopefully the momentum carries beyond this tour. With a new album, Every Trick in the Book, set to be released early December this band is certainly ready to break through and announce to the metal community that they are here to stay!

Overall this tour was a extremely pleasant experience, and I truly enjoyed watching each of the 4 bands brought to us. It’s exciting to catch bands at such a early stage when sounds and performances are still so raw, sounds are still being perfected and the bands playing for pure passion. Every band playing this night earned my respect and made me a  fan. Over the next few months we are certain to hear more from each of these bands so definitely keep and eye and ear out for them as they are certain to make their presences felt.

All albums and much more can be pre-ordered at http://fearless.merchnow.com/