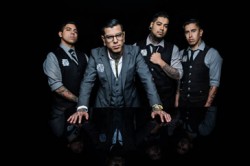 Upon A Burning Body

The stars at night were big and bright on this hot July night in Sacramento,CA. Upon a Burning Body lead a stacked All Stars Tour into Ace of Spades with one mission, to put the pedal to the metal and not let up. The band was relentless dropping hit after bone crushing hit, lead by energetic front man Danny Leal.

Even after enduring a long very hot day of music these fans still had plenty in the tank for UABB. Danny had them wrapped around his finger as he orchestrated the crowd at will. This set saw the band touching on material from all three of their albums and even closing out the night with their cover of “Turn Down for What?“.

This is definitely a band that is in sync delivering a flawless, energetic performance from start to finish. A band that performs and feels larger than life. If you are a fan of metal and a good party, I strongly suggest you check these guys out when they come to town. You will not be disappointed.

Next article - Upon A Burning Body »