Home » Portfolio » Blog » A Night Out With Josh – Soilwork 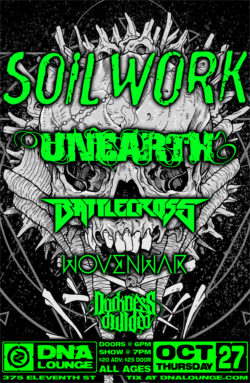 A Night Out With Josh – Soilwork

What a long strange trip it’s been for some of these bands. And here I am, the lowly fan that is also here to cover one of the shows I’ve been looking forward to the most the last few months.

It started with an almost three hour drive from Sacramento to San Francisco, a drive that would usually only be an hour and a half, thank you rain and fuckwads that have no concept of how to merge into traffic. That said, I walked into the DNA Pizza Place for a slice of pizza as Darkness Divided was ending their set, so I have no opinion on them. I was however saddened to see that directly after them was Battlecross, who I was hoping would play after Woven War, considering they were third on every single bill I had seen floating around. But had I gone in to the show to catch Battlecross, I would not have been able to sit and eat with three of the fellows from Soilwork who felt like chatting a bit and hanging out with some fans. Which brings me to my thought of the day, that it really impresses me when bands take the time and make the effort to go and sit amongst fans instead of hanging out in their tour busses until they have to go on, it really makes the fans feel important, like they actually matter to you in some small way, so I commend any bands that do this, because I think that most artists will come to find out that they probably wouldn’t get mobbed, they would probably just end up having some solid conversations! Moving on.

Battlecross, playing minus one member in their singer, still sounded as tight and thrashy as ever with their fairly newish brand of thrash molding old and new paying homage to Exodus while also showing the influence that the New Wave of American Metal had on all newer bands. If you don’t know what I’m referring to, learn, be educated on what you’re listening to. Because next came the always mighty UN-fucking-EARTH (Unearth), who always, and yes always bring some kind of intensity only found in the wild (or Oakland during a raiders game potentially.) They absolutely will the crowd to move, there is never a point where you can ever deny what Unearth continues to do for metal. With the losses of Shadows Fall, an unpredictable Killswitch, and many other falling to the wayside from that beautiful era that brought metal back from the grave, Unearth still flies that flag for us that remember the party that once was the early 2000’s metal scene. To me, Unearth is the Exodus of the “New Wave…” they may never reach the heights that Shadows Fall, Killswitch and Lamb of God have reached, but they will always bring an intense and personal show year in and year out and they will represent the good fight.

On a strange side note that goes back to artists hanging out with the fans, I have to say that I’ve interviewed Trevor from Unearth more times than I can count dating back to his short haired days when they were still signed to Eulogy and only had one album out, never, not once did he ever shoot me down, or give me a bad interview. On top of that, he seems to always remember me, maybe it’s because of the interviews, maybe it’s because I’m a genuine fan of the music, or maybe it’s a combination of both, but it’s a fantastic thing that will stay with me until I’m dead. Thank You for that.

As the night moved on past Unearth who had really blasted open the crowd’s enthusiasm that had been sub-par to that point; the quiet moments (and by quiet I literally just mean the stereo blasting Iron Maiden) had set in and I looked around and realized that the Swedish metal fans had now moved forward from the bar area with their Iced Earth, In Flames, and Sabaton t-shirts on. They were now glaring into the abyss of the stage – waiting, as am I, and sober. They peered on to the empty stage as the roadies completed their setup, hoping for that glimpse just before the band took the stage.

Then, suddenly, the roar of the Iron Maiden was silenced and we all got our wish, Soilwork entered. And boy did they… with a thunderous applause from the several hundred people that packed the joint and they were ready, as were we. At times through their set I wondered – was this the same Soilwork that I almost grew up listening to? Was this the same Soilwork that had toured the world and became big enough to branch out from opening for their older siblings In Flames? I wasn’t quite sure anymore, and in fact in the first few songs I realized that I felt like their passion wasn’t in it, Bjorn looked tired, and sounded a bit worked, I’m assuming from a long tour or long several tours. But then something happened about three or four songs in – the mood changed, or maybe my mood changed, I’m not entirely sure, but man, I just put my camera down for a few seconds, closed my eyes and I could hear it – I could hear myself being 18 again in my Jeep blasting a cassette tape of Steel Bath Suicide that I had found in a small record store in Atlanta, GA. See for me, Soilwork was my introduction to Swedish metal, so I think I always held them slightly higher than several others. I then realized at that moment that Soilwork was still the same band, maybe older looking, and more mature sounding, but they were still there, and they were the band that I’ve been waiting to see all year long, not disappointing for one second.

Thank You for that. Thank you for reminding me.

- Previous article « Beartooth, Every Time I Die, Fit For a King, and more are set to get SOULED OUT!

Next article - Album of the Year: Readers Choice »