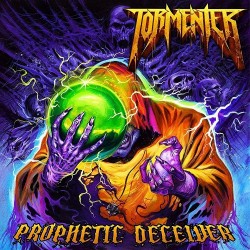 Prophetic Deceiver debuted as Tormenter’s second full-length in the fall of 2014. The album title makes the theme/subject of the album quite clear. Our so-called trusted officials, political and religious, promise a better future, but as loyal followers, are only met with fraud and suffering.

“Snakes in the Throne Room” starts the listener off with a soft, acoustic opening but is soon followed by a ruthless blitz attack on the drums. Combined with twin-axe work and steady vocals from Carlos, a clear picture of illusion of freedom was brought on by these treacherous bureaucrats. Key lyrics like “abolishment of hope,” indicate a clear attack on current administration, and outlines politicians clearly having their own agendas in the “nest of misanthrope.” “Hanging from a Noose” allows the drums to be given new life and momentum, but is still lacking the extra layer of foreboding the bass is able to provide. The title track for the album, “Prophetic Deceiver,” is where real energy takes over and the groove of the album becomes clear. A dialogue between Jahir and Joey becomes very important as the story of this false prophet shows its talent of inception, incorporating complex harmonies to mimic self-inflicted struggle.

“Exile from Flesh,” although the mosh anthem to the album, has Jahir’s opening strong leads taking the listener on a journey. The lyrics are a blunt reminder that death is our only release from our self-created painful reality. The bass calls out to me to accompany the dual solos; the talents of the warriors are fused and amplified. Joey gives a harsh backing to Jahir’s majestic tones and double-tapping, a chugging power with speed of sweep picking and alternating hammer work. “CPR” is a mid-point build which showcases Tomas and Kory, as blast beats are carried through the almost tribal rhythm of the bass. Personally, the build should carry straight through to “Critical Stasis,” but rather a progressive bridge is created to alter the already rushed mood of the album.

The finale to Prophetic Deceiver, can be translated to a tragic demise or a self-fulfilling prophecy (depending upon the listener). Here, Carlos’ vocals that carry over from the chorus most resemble Mr. Schuldiner’s from “Human.” The progressive twin axe work builds to a collapse of reverb, which the bass picks up to a chaotic change in timing, but descends once again to a mere crackle. The universe is breaking apart, and Tomas carries this whirlwind of blinding implosion. From this onslaught, the framework collapses and the guitars ring off in the aftermath. Nothing remains, and as a listener, I was a tad upset, having wanted more from this conclusion. However, this was the perfect intention of Tormenter!

For album production, nothing lacks, save the bass is often reduced to an almost inaudible level. Prophetic Deceiver is really a glorifying moment for Tormenter as they interwove complimentary genres to feed the appetites of the listeners. Their homage to Sci-Fi metal geeks is apparent in their Ray Bradbury and HR Giger references. For the next album, I hope to endure another round of searing pedal and crash work from Tomas, and we shall see if the guitars will contain deeper synchronicity. Carlos’ vocals continue to mature/grow with each changing theme; what may come next from these warriors is purely unknown!

Next article - Ascendancy – Pinnacle Of Creation »