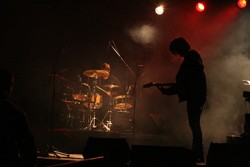 Our very own Robert Gross had a chance to talk with Norwegian extreme metal duo Anfinnsaas about their self titled debut album, available now. They discuss their origin, recording process and more. Make sure you check out all they had to say below:

ANFINNSAAS is a duo that was formed by Knut Finsaas and Geir Anfinn Halland Johansen in 2013, in Norway.

Their self-titled debut album, released September 18th 2015, is an earth-shattering blend of Nordic traditional music and metal. Taking their main inspiration from traditional Nordic tunes, ANFINNSAAS wanted to have a fresh and new sound that differs from the metal sound of today. The duo format gives the band room to explore new ways of playing and incorporating different soundscapes, as well as allowing them the freedom to indulge in an over-the-top chaotic style, showcasing their virtuosity on their instruments, without heading into self-indulgence.

ANFINNSAAS are ready to turn the world upside down with their fresh and terrifying sonic assault that resonates from the depths of the earth. The band likes to offer a hint of melody, only to quickly demolish it with an avalanche of buzzing guitars and thunderous drums. This is an audio apocalypse.

Next article - Children of Bodom »