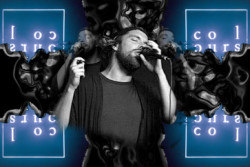 Colours, a Sarasota, Florida-based alt-rock duo, embarked on its tour with one man band Robert DeLong Saturday night at the Boardwalk. Comprised of Kyle Tamo on vocals and Morgan Alley on drums, Colours is set to release their debut album, Ivory, on February 26th. Upon entering the normally loud and raucous Boardwalk, I quickly realized that this was not your normal guitars-filled affair at the classic Orangevale scene. Even at eight o’clock, a half hour before Colours was set to take the stage, the crowd had arrived and there was an anxious energy in the air. The cavernous room had become less a concert and more a dark dream, filled with people of all shapes and sizes, many wearing the painted face of the wild animal living within them (if at least, for the night thanks to face painters in the crowd). Standing atop the empty stage the band’s logo glowed in neon blue, transfixing the sold out audience. Before even playing a single note it was clear that while Colours was the opener, they would not go unnoticed.

Soon a calm fell over the crowd and Tamo emerged from the blue haze, baseball cap backward, long, lose sweater draped over him. Resembling a modern day Jedi, he jokingly apologized for the brightness of their stage logo and launched into Lawless. Track one of their forthcoming album, Lawless was a primer of what was to come; a melodic cake of synthesizers, Alley’s beats and Tamo’s cool tenor.

Lawless was followed by Slow, which the band recently made available for streaming on Cool Hunting, an upbeat tune of whispering sensuality with a chorus that will set itself on repeat in your mind, “I want to feel your body next to mine. I want to hear you say that we’ll be alright.” Many of Colours tracks have a dark sensuality laced within them, giving them a sonic and emotive complexity similar to synth legends Depeche Mode.

As Tamo moves from song to song behind Alley’s pace, he eases from stage front to back, using the lighting of their effervescent logo as the backdrop to his shadowy figure. While Alley remains tucked to stage left, hammering out the rhythms, Tamo fully engulfs himself in the music, grasping the microphone with a controlled ache.

They seamlessly move through four other songs, highlighted by Gold Bones and The Unforgettable, and then conclude with Monster, a track featured on the Fox television show Lucifer. A tune equally hypnotic and radio friendly, Monster is the apex of the Colours brief, but solid catalog and perfectly matched the mood of the crowd. It is a song that will likely take Colours from openers to headliners their next tour. As the duo expand their sound and gain the further experience they will only evolve as greater artists and musicians.

For details on the tour, visit Victory Records.

Next article - The White Noise – Aren’t You Glad? »