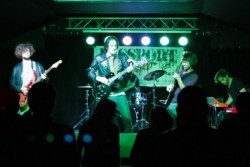 When I saw that Death By Chocolate was coming into town to perform at The Boardwalk in Orangevale, my first instinct was to assume that maybe it was some sort of chocolate convention. While The Boardwalk is not your typical venue for connoisseurs of chocolate, I had never heard of this quintuplet of Swiss musicians. However, I can now confirm, the band is not a brotherhood of chocolatiers, but in fact, a legitimate group of rock and rollers in the same vain as Black Rebel Motorcycle Club, or the Black Keys, both musical influences of the group. And these Swiss rockers mean business.

This was DBC’s debut in Sacramento, and though they may be new to most Americans’ ears, they have been making steady waves across Europe, even opening for Bon Jovi in Switzerland. Now word is starting to land states side winning the honor of Ultimate Industry Package at the Rock Summit in Los Angeles this past Spring and landing a spot on the current Passport Approved Tour bringing them in Orangevale this evening, and then up to Portland and Seattle before heading back to their homeland.

The show began with lead singer, Mathias Schenk, stripping off his wide-brimmed black hat, as if to announce the band’s transformation from spectators to rock stars. The amplifiers erupted of guitars, drums and keys almost immediately, with The Sun, a thumping anthem, taking The Boardwalk from a six to an eleven in volume. At this point the band was in full rock mode, and Schenk asked the crowd in his Euro-English, “We came all the way from Switzerland to play this show. So was it worth it? Sacramento, are you with us?” The small but eager crowd buzzed in appreciation, and the band rewarded them with Alfred, off their most recent album, Siren Calls. Alfred, with its almost playful rhythm, is a toe-tapper that blurs the pop and rock line, making it a likely suspect for radio play in the U.S.

As the DBC set entered its fourth song, In the Fields, a guitar-driven rock song, Schenk shed his leather coat and with it unleashed a new level of frenetic energy that permeated throughout the band. Bassist, Daniel Schläppi, adorned with his Napoleon Dynamite-esque hair, buoyed up and down on the tip of his toes as the beat shot through him. Guitarist, Thomas Schläppi, posted stage left, relied on his head to keep pace, his shaggy top lifting sometimes to reveal a smile to the crowd or a nod to the rest of the band. Meanwhile the keyboardist, Daniel Wyttenbach, and drummer, Kevin Chesham, worked on the periphery, frantically injecting rhythm, like an IV, keeping the heartbeat of the music alive.

The seven song set was concluded with a mid-tempo tune, and then a pair of fast-paced, adrenaline inducing songs, leaving the crowd pleased but wanting more. Though it was a sleepy Wednesday night in suburban Sacramento, it didn’t show in DBC’s performance. It felt raw, but polished, set for a much larger stage. They were both sonically and visually captivating with moments of charm.

Ultimately, the answer to Schenk’s question is yes, it was worth it. Death By Chocolate is worth the price of admission and more, whether they are playing to a crowd of fifty or five thousand, they come fully armed with hit-quality songs and an energy that is infectious. Next time they find their way to the capitol city, they could be playing to an arena crowd, and those of us that saw them at The Boardwalk can say, “do you remember when?”