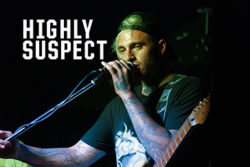 You know you’re in for a great show when, before the headliner even takes the stage, the crowd is singing along to the house music. That’s what happened at The Boardwalk October 1st as the packed house eagerly awaited the appearance of New York rockers Highly Suspect, Brooklyn-based trio of twins Rich and Ryan Meyer and frontman Johnny Stevens. And when they were called to the stage with a Michael Buffer-esque intro, it was like a champion boxer entering the ring; the crowd chanting to Lynard Skynard’s “Simple Man.”

On the road promoting their highly anticipated sophomore album, The Boy Who Died Wolf, Highly Suspect roared onto the rock scene in 2015 with two Grammy nominations for their debut album Mister Asylum and their hit single “Lydia.” But like a prize fighter, the accolades didn’t come without their share of bruises. Before Asylum, the trio earned their stripes as a cover band playing the hits of bands like Sublime, Jimi Hendrix and Pink Floyd throughout local bars in Cape Cod. And the experience shows. The three bandmates, friends since high school, exude the confidence of veteran rockers and even with their limited catalog, bring an energy to each song like each is a classic. The band is equal parts boy band attractive, New York City tough and southern rock charming, appealing to fans of bands as varied as Kings of Leon to Queens of the Stone Age to 1990s pop-punk mainstays Blink 182.

The set began with the head nodding “Bath Salts” and the crowd wasted no time joining in. A blend of young teenage girls swooning for Stevens to thirty-something males getting their rock fix, from the opening chord, the audience was a choir of strangers echoing Stevens’ lyrics. The youthful, tattoo-adorned guitarist and singer sang with a clarity that made it easy for even the novice fan to join in on the show. The sound was clear and clean but still performed with a raw energy reflective of the lyrical content. This is quite a feat for a packed club of a few hundred people with amps wrapped around the small stage.

In the next round of songs, Highly Suspect proved that they not only had the chops to rock, but they knew how to own the stage and keep each song fresh and interesting. During multiple songs, they would stop dead in the middle of the track and leave a long, silent pause and play to the crowd, sometimes with Stevens taking a shot from a bottle of 1800 Tequila at the foot of the drums. This, of course, would throw the crowd into a roaring fit. For less confident bands, such a moment might feel staged and awkward, but with their swagger and energy, it felt like the tease of a teenage crush, just making the packed house ache for more.

The show reached its apex mid-set as the band played their hit “Lydia,” along with the lyrically provocative “Serotonia” highlighted by the introduction, “I wish that everyone I knew was dead. So that I never had to pick up the phone. I just wanna be naked. Masturbate all day at home.” The track, a slower, guitar driven tune, fed the crowd’s adolescent teenager within while giving them a chance to breathe and brace for the final blitz of sound to come. The concluding tunes were a stew of old and new music from the blues inspired “Round and Round,” to their latest single “My Name is Human” off their forthcoming album, sure to be a radio mainstay. If “Human” is indicative of the band’s progression, their stock is sure to rise. The single shows a maturity and complexity pulling from multiple genres while exploring the evolution of boy to man, a promising sign of what’s to come on Boy.

By the end of the evening, Highly Suspect had proven that they were more than studio produced rock candy, they were the real deal. Their songs were crisp, clear and inclusive and their stage presence was confident, yet appreciative. They are a band on the rise and seeing them in such a small, intimate setting is not likely to happen again if they continue to produce albums like Mister Asylum and grow as artists in the coming years.

Next article - A Night Out With Josh – Casualties »