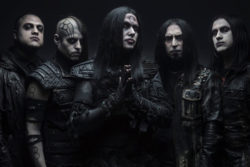 Calling all corpses and ghoul-scouts, Wednesday 13 is back with a brand new music video! What The Night Brings is the first single off of his upcoming Nuclear Blast debut, Condolences, which releases June 2nd. What The Night Brings sees Wednesday sticking to the heavier sound we heard on the previous release, Monsters of the Universe. Personally that was one of my favorite albums of his so im excited to see where this new album takes us. Check out the video below:

Album pre-orders have begun through Nuclear Blast and can be found at : http://nuclearblast.com/wed13-condolences. The track is also available through most digital providers.