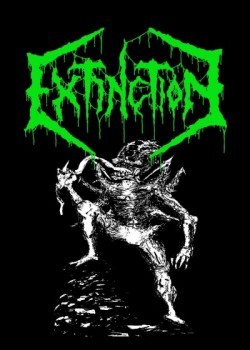 Extinction is an up and coming brutal death metal band hailing from North Hollywood, CA!  They have been raging since 2011, but they have built a solid fan base that has supported them to their fullest as they moved onward in recording their sophomore album, “Dead Space.”  Extinction has an undeniably old school sound that has gotten darker and more complex—their trademark energy and hard work has helped them grow quickly.  Get to know the metal warriors and request for them to come to your hometown!

You guys have this quality to yourselves… You’re very young, but you already know your sound and Extinction is solidly known under an old school Death Metal vibe.  What’s the secret?

A little bit of everything!  We’ve been in bands together before Extinction, so the connection really helps.  We’re all very in sync with each other, and the connection really helps that we’re all best friends.  We grew closer together listening to the music we admire, and we mostly all have the same influences.  That has all just marinated together to create the bond of how we work together and the music we are continuing to develop.  We practice as much as sanely possible, and we all have the same drive to get our music to the public eye.  There is still a hill we have to get over in terms of accessibility to 21+ venues, but we’re not worried about any preparation in that sense because we’ve already played for serious crowds and bills.

Last year, Extinction played a badass show with Deicide at the Whisky.  Tell us about your experience!

That was a pretty insane show!  It was a surreal experience opening up for pioneering bands like Deicide and Broken Hope.  Deicide is such a huge influence for us and getting to play with them was such an honor.  Broken Hope is also largely a part of our influence, and it was an honor sharing the stage with them as well.  The Whisky was very good to us.—The house was packed wall to wall, floor to ceiling, and to boot it was completely sold out.  We overheard people were still trying to buy tickets mid-show!   The crowd raged with us the entire time; everyone was banging their heads and really digging what we had in store.

Skull Island was your previous EP to Dead Space, can you elaborate on its story and influence?

We recorded that album at the Riff Haus in Fullerton, CA in precisely one day!  It was a speedy experience so to say.  We’ve matured a lot since then.  We wrote what sounded catchy and have expanded our knowledge and skills since Skull Island. The lyrics fixated on stories about King Kong, murders, killing people, serial killers–you get the idea.  Our lyrics have gotten more in depth, and we’re writing with better intent on creating visuals for the fans.

How did Extinction create the concept for Dead Space?

Dead Space is one of our favorite video games by far!  Individually, we worship horror from the cinema to video games, and Dead Space is definitely born of brutal horror.  We built on the concept of the game, and really created a diverse theme to fit into our style of death metal.

What can we expect to hear on Dead Space?

More technicality, variation on time signature changes, grooves, diverse vocals from Hunter and Wolf, so, everything!  Dead Space is our heaviest material to date, and a big step up as well as improvement from Skull Island.  Lyrically, it’s a mix of our own stories written with a horror movie influence.  We let our minds run wild with the concept influenced by the video game.  The album is written to the tune of the storyline, as the fans’ journey starts, they are traveling through space in search for life, but they are unable to escape the unknown world upon which they have crash-landed. We created multiple settings of an eerie darkness in the storyline as well as the music itself–which is lended by the intensity of the switching vocals, brutal riffs, and destruction from the bass and drums.  The fans get to feel the full effect of the imagery, also as the narration switches between the humans as well as the evil.  We want you to feel like your fear creates a shell–that you are trapped in hell.

How has the new album been received?

We’ve been getting great responses from people.  It’s a huge step-up so people are really surprised to hear what we’ve been able to write and make since Skull Island.   They constantly rave about the solos, and the production is levels above Skull Island, so they can hear more of our musicianship.  The fans think Dead Space is brutal and it’s exactly what they wanted to hear.  We haven’t heard anything negative or critical, thankfully, but people have been really supportive, and we appreciate that so much.  Fans who have seen us live are stoked to hear what we’ve created and gives us encouraging fuel to do better and keep on creating.  We’ve been contacted up by different promoters and blogs and have been put on compilation discs.  One of our biggest surprises was hearing our material on a radio station down in South America.  Our favorite promoters who have really come through for us in publicizing our material have been Papamortus of Keep Metal Alive Productions, and Dave from the Cobalt Cafe who has also been very helpful in establishing us as death metal headliner in the Valley.  As for one of our favorite blogs we were featured, everyone needs to subscribe to The Power of the Riff Compels You.  The Power has shared our material from the beginning, and we definitely want to thank him for all of the support.

Extinction just recently went on tour!  You guys performed for new faces, new crowds, new cities.  What were the highlights?

The tour was different than expected, but we made the best of bad planning.  There are always a few upsets to be expected.  Vegas was our first time out of state, so that was definitely a new experience!  The crowd really enjoyed us, and it was a blast playing brand new venues.  The Dive Bar in Vegas was the best show we had on the road,  and we even ended up hopping on a Cheyenne Saloon show with Amputated Genitals (Colombia).  The Cheyenne venue was sick–big stage, great crowd, it was exciting to see new reactions.  Traveling through California was easy, and open deserts for the most part, we got cranking the whole way there.  We were stoked to be out on the road promoting!

Extinction recently also acquired new drummer Tyler Cure.  Was the change seamless, and did you guys manage to break him while on tour?

Haha–We’re really all very connected, a circle of musicians in a way.  Hunter and Luc previously were in the band Dark Crusaders, which Tyler played drums for the band.  Hunter and Luc left Dark Crusaders for Extinction, but they all still stayed in touch. Once we started looking for a new drummer earlier this year, it was perfect to have him come in.  With Tyler, we already had that connection with each other, and have a great vibe working together.  He’s a beast drummer!  As for the tour, he really fell into his own groove.  We were all a bit scared with him having played only one show before going on tour.  Tyler really impressed us though.  He was born to do this, and has the same drive as the rest of the band.  The tour was smooth, no drama, just a very professional rhythm!

Do you have other tours on schedule?

We don’t have any tours on schedule yet, but we are working towards them in the future.  We’re funding ourselves, and want to hit other states, and work with great promoters!

Next show: August 30th “Into The Thrash Fest” hosted by Kill Death Productions at the Nile Theater in Mesa, AZ: Sakrificer, Warhead, No Terrain.

You can listen to Extinction’s latest EP at Reverbnation!  http://www.reverbnation.com/extinctionmetal

Give them your bloody thumbs and support on Facebook! https://www.facebook.com/extinctionmetal